The cult horror series has received a new addition. However, like Resident Evil 7, it no longer deals much with Umbrella’s filth, but goes in a significantly different direction. However, it does not completely break the bond with the original motifs and characters. Chris Redfield, who was already in the seventh grade, will appear in the Village, and we know the good, especially from the older parts. However, the main space will be given to Ethan, who, after the hardships of the last game, hopes that he has a peaceful life ahead of him with his family, but it is Redfield’s arrival that will change everything.

Ethan then suddenly finds himself in an unfamiliar environment, in a settlement where a new nightmare awaits him. He will soon be under attack by bloodthirsty lycans, and he has no idea that he will face other threats at the castle, in a dollhouse, mine, lake or factory, where he will meet isolated survivors, but mainly various bizarre characters and monsters. You may find the introduction too action-packed and be prepared for the fact that there will be many similar passages in the game. Not everyone will come to terms with the fact that the game is going this way, to a certain extent at the expense of survival elements. But you don’t have to worry that the original spirit of the series with its typical components has completely disappeared from the game. Although the creators have added something extra that you may or may not like. 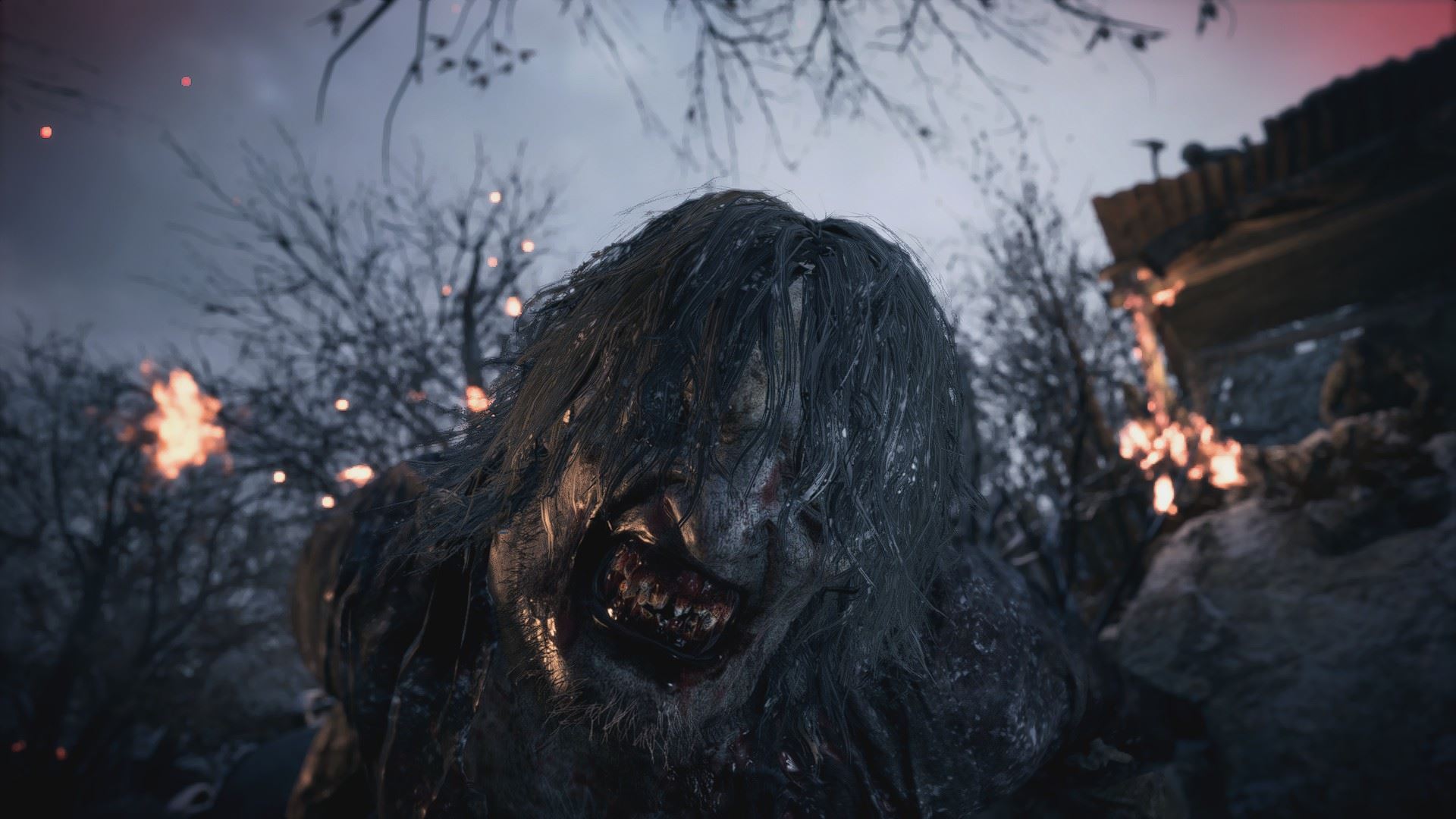 The castle passage is close to what the first parts of Resident Evil offered us, although it is no longer such a hardcore survival and Ethan does not have to save every charge or speculate too much. Instead of the hall of the police station, the center here is a historic hall, from which various doors and stairs lead to other areas. Even this time, many are locked and can be entered later, after obtaining the right key or discovering an alternative path. Ethan is collecting items again, but this time there are fewer key ones that need to be turned around and carefully looked at to reveal their true meaning and be used in solving puzzles. If the puzzles were missing here, the creators even tried to create new ones that do not resemble the puzzles from the previous parts. But still they retreated a little to the back and the event was given more space. In any case, the lock, with its gameplay, is most inclined to the content of classic RE games.

On the other hand, other localities are already significantly more active and the interaction with the surroundings is more modest. The exception is the house with dolls, where you can at least to some extent enjoy hiding in the dark and stealth elements, because there you can not rely on weapons. In many locations, however, you will often have your finger on the trigger. You will still need various items to activate, turn or open something, but most of the time you can get to them without much trouble and do not need a head for it, but ammunition or dexterity. For example, you have to shoot through a horde of lycans, run through machines in a factory to a casting furnace or on boards on the water, where you are definitely not waiting for a picnic. Ancillary activities are additional activities, such as pulling objects out of wells, when you get a crank or mini-games with a ball, which you have to get to a certain point by tilting the model.

Sometimes you can feel like you are in totally different game

In addition to a few major antagonists, you will fight lycans, various revived beasts, flying creatures or mechanical enemies, whose only sensitive place is the energy source on the chest, which they hide from you. And, of course, the bosses will come next. Sometimes you can help by shooting into explosive barrels or bags of flour, which will briefly blind the enemies, or block the door with a closet. This time you will have enough combat arsenal. Just because you can buy weapons (pistols, shotguns, sniper rifles, grenade launchers, mines and special pieces), ammunition, upgrades, but also instructions from your dealer. As a bonus, they will also prepare special dishes from fish, poultry and goats, which will permanently increase your life, endurance or strength.

You get money for purchases from victims or you can find in drawers and broken vases. The sale of discovered and conquered crystals and valuables will also help. However, Ethan is largely self-sufficient. Ammunition does not only have to collect and buy, but also the production of things by combining items in the inventory has been preserved. These include gunpowder and known medicinal plants from which medicine can be made, but there are also new raw materials in the form of ordinary waste.

The inventory is relatively large and can be expanded, although the arrangement of objects is very cumbersome. However, the production section is practical, you can produce medicines and cartridges according to the adopted plans by a simple confirmation when you have the necessary raw materials. And the key items have their own section and can be conveniently viewed, selected at the point of possible use, or combined. The map is helped in the process, where the red marking of the rooms has been preserved, where you have not yet selected everything that can be found there. The game is saved automatically and then manually with classic typewriters, the differences also depend on the overall difficulty of the game you have chosen. There are three at the beginning and even the middle one bothers you only slightly. So if you want to confirm, choose the highest one straight.

You have to be aware of everything. Also dolls

After completing the game, which is possible in ten hours, but it can stretch to sixteen, you will then have a fourth challenge and it will be a chore. And with it a lot of bonus content, including extra weapons, character profiles, artwork, additional videos. Plus challenges with points to unlock more components and also the Mercenaries minigame. There you have to kill enemies in a limited time in a limited time, and you can activate plowing with extra time or some strengthening ability.

The game has a nice modern visual that you can customize as needed and there is no lack of Ray-tracing support. Many locations are precisely designed with an emphasis on detail, lighting effects and reflections. You can enjoy it at any time in photo mode. The story, which has a certain depth, but cannot be said to be exceptional, is accompanied by a large number of partition scenes with quality dubbing. Music manifests itself especially in dramatic moments, such as fights or impending danger, so you can be more careful about that as well. You watch everything from a first-person perspective. The creators already stick to a practical camera with free rotation and monitoring of the surroundings. It has previously replaced the static and sometimes impractical views from different angles that were characteristic of the first parts of the series.

The atmosphere of the Village is great, you will experience moments with then on the forehead, but it is not as scary as in Resident Evil 7. Probably it is also because with so much equipment, which you usually have without problems, you are not in such a stress and you are not afraid of revelation. Survival retreated significantly to the background and the stealing was replaced by shootings, which sometimes evoke the Call of Duty. In addition, it has moved significantly away from Umbrella and the T-virus (which has already begun seven) and it looks different – either by gameplay or by setting the story.

In the individual passages of the game, however, you can find interesting motifs that can resemble kadečo. In some places, I remembered the American Horror Story, a film Ritual starring Nicolas Cage and Dracula. The atmosphere of the underground factory evoked Necromunda. And there were situations and places where I felt like a character from Fallout or Metro games. It’s a really significant departure from what we once experienced at Resident Evil, but that doesn’t mean it’s bad. It is simply different, interesting for some players, but difficult for others to digest. So you will either have an intense experience or a disappointment with how the series changes and transforms. If such an action-packed horror mix does not bother you, you will enjoy the Village and it can be among the best you will play this year.

The other side of the coin

Orthodox players who are eager for the return of honest survival horror with prudent progress, discovery and strong interaction with the environment, however, do not identify very much with the Village. And they may miss Umbrella. The action element in the game is too dominant, the tension and fear for life have largely receded from the adrenaline rush of the fight, which suppresses its characteristics. And that’s a shame. The story holds up nicely, but it also has its weaknesses and it cannot be said that it is extraordinary. The strongest is in the introduction and in the castle, where the best balanced playability. Gradually, however, the tension and intensity of the game eases and shootings come to the fore. Therefore, the result may not be entirely satisfactory. In this case, lower your rating to 7.0.

As it is, RE Village is simply a good game with excellent production value.

Call of the Sea Review

We are site which purpose is to find you the best deals for your games. Buy PC and console games at the lowest price (Steam, Origin, Battle.net, Epic Games Store, Sony PSN, Xbox Live)